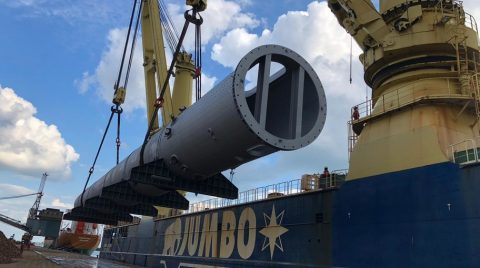 The Jumbo Jubilee is on its way to Algeciras, Spain, after loading two 1400-tonne reactors and three smaller ones in the Port of Venice. The reactors were placed on board using the ship’s two 1800-tonne cranes.

The reactors were produced by ATB Group, located in the North of Italy (Brescia). It concerns two LC Finings, requiring very particular and delicate assembly sequences. The handling of the two over-size reactors was also delicate: land transfer and boarding procedures were followed by Campostano Anchor. The sixty-metre long convoy was moved with special SPMTs (self-propelled modular transporters) of ATB Group to the Multi Service terminal, which is dedicated to handling special cargoes.