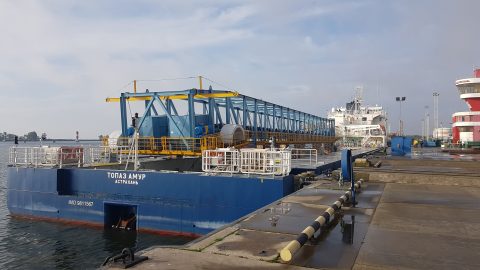 P&O Maritime Logistics has just secured two new contracts for its deck carrier Topaz Amur, after three years of delivering large project cargoes from the Baltic and Black Seas to the Caspian Sea. With more vessels to join the fleet, the company is eyeing expansion to new areas.

Over the next 12 months, P&O Maritime will significantly increase its presence in the breakbulk market as the Topaz Amur will be joined by several sister vessels. Trading areas are expected to be expanded from the vessel’s home market in Black Sea, the Russian rivers and the Caspian Sea to include the North Sea, Mediterranean and Baltic Sea.

“In order to be successful in this segment, we have adopted an approach of developing partnership models with complementary service providers to ensure we deliver tailored end-to-end solutions to the ultimate customer, as we’ve done in this case”, says CCO Robert Desai of P&O Maritime Logistics.

In continuation of the partnership with Danish transport and logistics solutions provider Blue Water Shipping, the second project will see Topaz Amur loaded in Esbjerg with wind farm equipment to be delivered to the Alexandra Dock in Hull in the UK.