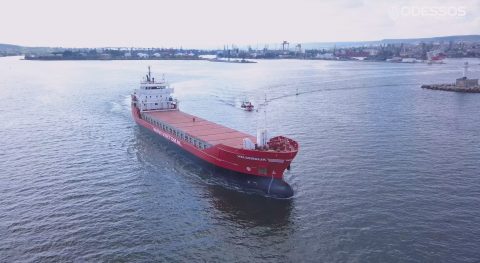 The International Maritime Organization (IMO) has approved a proposal to introduce an energy label for shipping. The plan is that all ships are to receive an operational carbon intensity rating ranging from A to E, with A indicating a clean and efficient ship and E being a very polluting vessel.

The starting point is that a ship scores at least a C, which stands for average. Shipping companies that fail to achieve this score three years in a row must draw up an improvement plan. The criticism focuses mainly on the lack of sanctions for ships that flout the rules. The scheme will be evaluated in 2026.

What is new is that the system will also apply to existing ships. Up to now, IMO regulations have been limited to new ships. A few years ago, the UN agency set the objective that greenhouse gas emissions, especially CO2 but also methane should be reduced by forty per cent by 2030 compared to 2008. This target will not be achievable if stricter emission requirements are only imposed on new ships, the organization concluded.

The Carbon Intensity Indicator (CII), as the label is officially called, is based on the Energy Efficiency Existing Ship Index (EEXI) which indicates the energy efficiency of a ship in relation to a certain minimum level. The CII and EEXI, in turn, serve as the basis for the already mandatory Ship Energy Efficiency Management Plan (SEEMP), in which the ship operator indicates which operational measures he takes to reduce emissions. The IMO speaks of a dual approach because it combines technical and operational measures.

The plan has been approved by the IMO’s Marine Environment Protection Committee and now goes to the member states, which have six months to respond. It will then come back to the MEPC, where it will be on the agenda next June. Sixteen months after that at the earliest, the new system will enter into force. This means that the energy label cannot be introduced before 2023.

European countries are critical of the system, saying it is too non-committal and ineffective. Climate organisations such as Transport and Environment see nothing in it and state that the plan greenlights a decade of rising greenhouse gas emissions because the shipping industry will fail to reduce emissions before 2023.

“Europe must now take responsibility and accelerate the implementation of the Green Deal. The EU should require ships to pay for their pollution in its carbon market and mandate the use of alternative green fuels and energy-saving technologies. Across the world, nations must take action on maritime emissions where the UN agency has utterly failed”, says shipping director Faïg Abbasov of Transport & Environment. John Maggs of the Clean Shipping Coalition says the “complacency is breath-taking” and speaks of an act of “extreme folly”.

The organizations are not alone in their criticism. Shipping company Maersk also strongly criticised the plan. According to the head of Legal Affairs Simon Bergulf, the IMO is “walking a path of minimal compliance”. According to him, the IMO is thereby jeopardising its own target of a 40% CO2 reduction by 2030. He warned that the shipping industry needs global regulation and not regional initiatives.

European shipping companies fear the European Union may implement its own stricter set of shipping rules if the IMO does not uphold the previously set ambitions. According to the European shipowners’ association ECSA, this would create an unfair level playing field.

CEO Ralf Nagel of the German shipowners’ association VDR says the effectiveness of the label system is underestimated. “The pressure involved in being on the market with the most efficient ships is being considerably intensified by the CII since it creates transparency for all market participants. Let’s face it: who still buys a technical device in a poor efficiency class nowadays?”