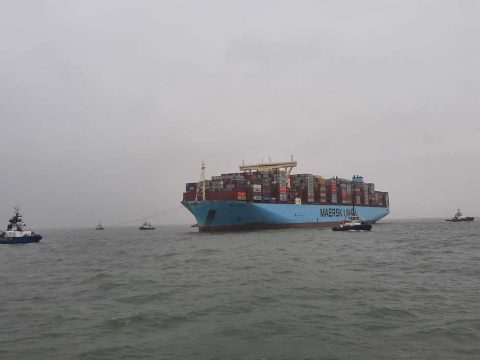 Mumbai Maersk, one of the world’s largest containerships that got stuck in a shallow patch off Bremerhaven has been towed free in the second attempt during the night. According to Germany’s Central Command for Maritime Emergencies informed that the second attempt, around midnight when the tide was favourable, was successful.

To remind the 2018-built giant was on its trip from Rotterdam to Bremerhaven when it ran aground off the German island of Wangerooge in the North Sea around 23:00 CET on February 2. The first attempt to tow the vessel free by CCME’s support vessels and five tugs was unsuccessful. Maersk hired a salvage company in an attempt to free the vessel as soon as possible.

For the second attempt, Boskalis provided its AHT Union Sovereign for the job, and aided by Neuwerk and six assistance tugs the 20,568 TEU boxship was moved from the spot to deeper anchorage. CCME added that the vessel will be in the port as soon as possible.

Sailing from Asia, the vessel had its last stop in the port of Rotterdam before grounding outside of Bremerhaven. The vessel was on its way to discharge and consequently the cargo meant for Bremerhaven is still onboard, along with cargo destined for the Scandinavian countries.