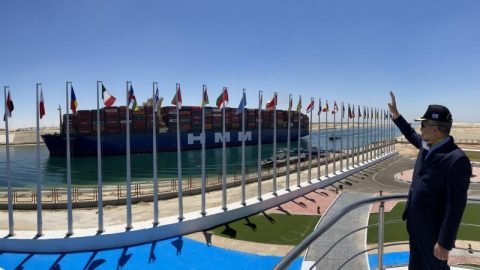 The Suez Canal achieved a record turnover of $7 billion (some 6.7 billion euros) in the last financial year. The increase in turnover followed increases in the rates for the use of this important Egyptian waterway. This was reported by the Suez Canal Authority (SCA).

The old sales record was $5.8 billion and dated back to last year. The Suez Canal was then in the news, when the container ship, named the Ever Given, ran aground and blocked the canal. This blockage sent global shipping into disarray for a time. Despite this, record revenues were booked due to the strong demand for goods. This came from consumers who were in lockdown during the COVID-19 pandemic.

Through the canal, which remains the shortest shipping route between Asia and Europe, approximately 1.3 billion tons of cargo were shipped between July 2021 and June 2022, according to Osama Rabie, head of SCA. The canal, which connects the Red Sea to the Mediterranean, accounts for about 10 percent of global maritime trade.

The SCA raised its rates twice last fiscal year for ships, including large fuel tankers. In April, the waterway posted its highest-ever monthly turnover, $629 million, despite the rise in oil prices due to Russia’s invasion of Ukraine.

The Suez Canal is also an important source of foreign currency for Egypt, which is facing high inflation and a depreciation of its currency due to the war in Ukraine.  In June, rising commodity prices pushed Egypt’s inflation rate to over 15 percent, the highest level in three years.

In late March, Egypt’s central bank allowed the Egyptian pound to depreciate against the dollar, causing the currency to lose about 18 percent of its value overnight. To cushion the economic impact, the government applied for a new loan from the International Monetary Fund, and raised billions of dollars in investment from Saudi Arabia and Qatar.