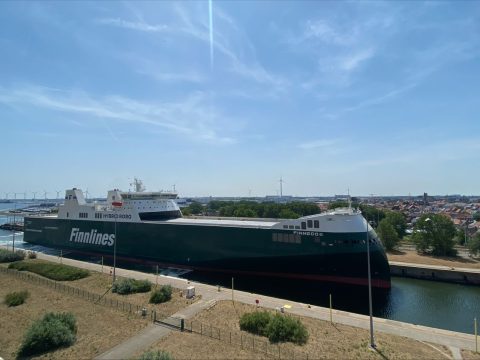 After delivering a load of rolling stock to the ICO terminal in the inner port of Zeebrugge, the Finneco II left the the P. Vandamme lock on Sunday afternoon, setting sail for Helsinki. This vessel was delivered from the China Merchants Jinling Shipyard last month, shortly before the Finneco III was also delivered.

The Finneco II hybrid ro-ro vessel, delivered on May 30th 2022, measures 238 metres in length and has a cargo capacity of 5,800 lane metres, and a gross tonnage of 60515 tonnes. The Finneco II is also exceeding environmental standards, with the implementation of a number of new techniques including but not limited to  two-stroke engines, and an air pressure system to reduce hydrodynamic resistance,  and 600 square metres of solar panels coupled with an advanced 5 megawatt battery pack to drastically reduce emissions in ports.

The Finneco III was delivered on June 6th, 2022, and has the same specifications, and emission reduction technology onboard, as its sistership, Finneco II. Compared with the largest vessels in Finnlines fleet before the Finneco’s, these hybrid newbuilds have increased the cargo carrying capacity of Finnlines fleet by nearly 40 percent.