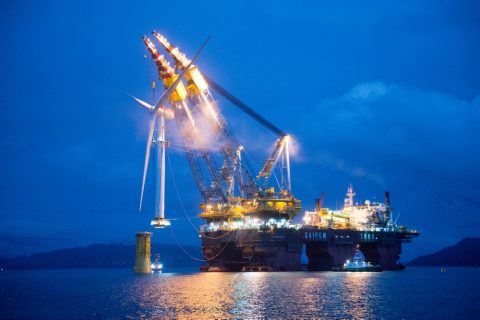 Siemens Gamesa will not be rushing bigger wind turbines to market following GE’s release of the 12MW Haliade-X. Instead, the company will focus on improving its position amidst a period of rapid consolidation that will leave “only two strong wind players” outside of China, says CEO Markus Tacke.

The transport and offshore industry is preparing itself for “the next-generation” of wind turbines like GE’s recently released 12 MW Haliade-X, which is set to enter the market in 2021. Siemens Gamesa, however, will not be releasing larger turbines in the near future, Tacke said in response to questions from PCJ.

“We are very happy with our large backorder and our products”, he said. “We have done a step-change from 6 to 8 to 10MW. Ten will not be our final number but when we release a bigger turbine, we will do it in an evolutionary and not a disruptive way.”

Currently, the company’s main focus is to protect its investments and (financial) position. Fierce competition has shaken the industry and sparked rapid consolidation among the worlds top-10 wind turbine manufacturers. Two of them, Senvion and Suzlon, are already undergoing major restructuring processes.

As a result, the company is axing 600 white-collar jobs, mainly in Spain, Denmark, the UK and Germany.

“We are in a competitive position, but in order to maintain profitability we need to optimize our structural costs”, Tacke said. He emphasized soft measures will be used as the company overall is in a good position. However, Tacke did not rule out further reductions, saying the company will continuously keep reviewing its financial position.

Once the consolidation is over, Tacke believes there will only be four OEM’s outside of China. “Two of them are struggling and two are on the strong side. Siemens Gamesa is clearly one of the two on the strong side”, he said speaking at a press conference in Madrid where the company released its results for the fiscal year 2019.

Siemens Gamesa booked record commercial activity increasing its turnover by 12.1% to EUR 10.2 billion, doubling its net profit to EUR 140 million, and booking a record order intake of EUR 25.5 billion, up 12% year on year. Despite the strong results, Tacke warned the headwinds will persist with 2020 being a year of transition.

Asked if Siemens Gamesa will be an active player in the further consolidation of the industry, Tacke said the company will not be pursuing any major acquisitions but does look for value-adding opportunities.

“We are actively looking for bolt-on acquisitions that will strengthen our position, like the recent purchase of selected business units of Senvion, but when it comes to larger acquisitions, we feel we’ve done our fair share. Siemens Gamesa is the result of the largest merger in the industry”, Tacke explains.

Just last week, Siemens Gamesa announced it will buy the onshore European business from Senvion which will add 8.6 GW in service contracts to the company’s portfolio. As a part of the agreement, Siemens Gamesa will also acquire Senvion’s blade manufacturing plant in Portugal.

In response to Spanish journalists, Tacke said he will not be moving any production from Spain to Portugal. “The plant in Portugal serves to make us independent from manufacturing facilities in Asia and will be more of an export plant”, he said.